I’m not always aware of the pressure I place on myself to maintain high standards, even in self-imposed projects with no specific expectations. For this project I planned to read each book, then write some sort of response to post here on the blog before starting the next book. Life, as I’m increasingly forced to acknowledge, rarely proceeds in the way I have planned.

The same day I finished reading Prodigal Summer, I was spending time outside with two adorable munchkins – ages three and almost three – enjoying a warm splash of sunshine in an otherwise chilly November day. There were bunnies hopping around the yard with kiddos trying to catch them – I wasn’t much concerned they would succeed but it was adorable to watch their process – and the neighbor from across the street came over to chat about the bunnies. I had no idea one of the other neighbors had rescued them from the humane society about a year ago and they had been hopping through the neighborhood ever since. He meandered back over to his house and proceeded to use special leaf picker-upper tools to take the leaves from the neat pile on his front lawn and place them in large black garbage bags. By the time his project was completed, there were sixteen plastic bags neatly organized by the side of the road awaiting pick up.

With Kingsolver’s words still reverberating in my mind, I was thinking of the folks I know in rural Vermont for whom leaves are a wonderful tool used to mulch a garden, and are part of the natural flow of decomposition to help the soil provide nutrients for future generations of plants. Watching someone take those leaves and put them in giant plastic bags where they will not be able to contribute to the cycle of life made me aware of the plethora of ways we humans interfere and make things harder for this planet. I was also thinking of the domesticated bunnies allowed to roam free through the suburban neighborhood, and much to the surprise of the neighbors not only did they survive but they have thrived. Perhaps it’s a nudge toward realizing that if we, as humans, can step aside a bit, life will often find its way.

I started this post thinking I didn’t have the time to do justice to Kingsolver’s command of descriptive language and ended up writing a response after all. Who knew that by explaining how I was breaking my own rules, I would end up following them.

Just for a minute, she herself had forgotten to be sad. She felt guilty and hopeful both, realizing that beyond these numb days lay an opposite shore where physical pleasure might someday surprise her with its sharp touch. Where she would see colors again. 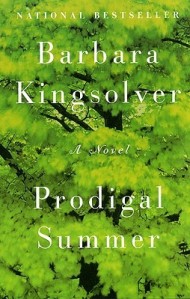 From Goodreads: Prodigal Summer weaves together three stories of human love within a larger tapestry of lives inhabiting the forested mountains and struggling small farms of southern Appalachia.

From her outpost in an isolated mountain cabin, Deanna Wolfe, a reclusive wildlife biologist, watches a den of coyotes that have recently migrated into the region. She is caught off-guard by a young hunter who invades her most private spaces and confounds her self-assured, solitary life. On a farm several miles down the mountain, Lusa Maluf Landowski, a bookish city girl turned farmer’s wife, finds herself unexpectedly marooned in a strange place where she must declare or lose her attachment to the land that has become her own. And a few more miles down the road, a pair of elderly feuding neighbors tend their respective farms and wrangle about God, pesticides, and the possibilities of a future neither of them expected.

Over the course of one humid summer, these characters find their connections to one another and to the flora and fauna with whom they share a place. Prodigal Summer demonstrates a balance of narrative, drama and ideas that is characteristic of Barbara Kingsolver’s finest work.

Why This Book: When I asked people to tell me what books they thought I should add to my list of 42, this book came up more than once. I’ve enjoyed several of her other books over the years and am excited to read this one.